A Short(ish) History of John B Hannon

Born in Bethlehem (Hospital) in 1952, to Kath and Bernie Hannon, as eldest of 5 children, 2 younger brothers and 2 younger sisters. I grew up in Moorabin and then Brighton and Gardenvale, in a rather full house, where my maternal grandparents lived with us too.  I attended St James’s School in Gardenvale, and then CBC St Kilda from 1963, the year in which President Kennedy was assassinated and Archbishop 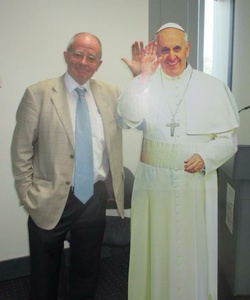 Mannix  died, both in November.  Completing Year 12 (Matriculation back then),  in 1969, the year of the moon landing, the Jumbo Jet and Concorde taking off, I then did First Year Science at Melbourne University, as my parents (rightly, I say now!)  insisted I was too young for a seminary, having just turned 17.  It was an interesting year in many ways, with Moratorium marches and protests being something of an eye-opener and mind-broadener, for a good young Catholic boy, just out of school!

My first job outside of school was as an Unapprenticed Youth at the now defunct, but still standing, EFM, the Government Explosives factory in Maribyrnong, and what’s more, in the Explosives Laboratory, just around the corner from my current employment in 2018!!  No danger money was included in the $22.23 per week wage either!  I managed to somehow survive the experience and graduated to the main Chemistry Laboratory the next year, and was promoted to analyse sewerage from the treatment plant, before it hit the Maribyrnong River!

In 1971, however, I joined 26 other enthusiastic and idealistic young men (sadly, 7 of whom have since died), 22 from Melbourne, and 5 from country Victoria and Tasmania, at Corpus Christi College Werribee, where we entered a monastic type of lifestyle in formation for diocesan priesthood. Fortunately, the scene broadened when Werribee closed at the end of 1972, and we moved to a more open scene at the new CCC at Clayton, which provided the opportunity of more practical parish involvement as well as the formal tertiary studies in theology, scripture, psychology, history and other aspects of formation for priestly pastoral and sacramental ministry. In addition, there was the possibility of secular tertiary studies at Monash University, where 11 of the 22 in my year took that option in 1974.  I was the odd one out, in that I argued my way into completing my degree in Science, majoring in Biochemistry and Chemistry, whilst the pressure was on to pursue an Arts degree.

By the end of 1975, I was unsure of my future directions, and decided to take a year off and do an Honours degree in Chemistry, thinking perhaps of Medicine, moving back home to family life (having lost my single room) in Gardenvale and commuting to Monash each day, in my $50 1961 Mark II Zephyr automatic, often accompanied  by the future founder of Baker’s Delight, who like me, later changed directions from the chemical world!  Meanwhile I had further interesting holiday jobs in the field, in pathology at the Repatriation Hospital in Heidelberg, analysing blood and other things, and then in a North Melbourne flour mill, doing wheat protein measurement.   Also, there was a bit of drive-in bottleshop work, races and football service, and a fruit shop thrown in at Rye, (with 12 hour working days) one summer too!  So, there has been plenty of diversity of experience in the field of work!

I seem to have developed a permanent taste for travel, after a trip to an ordination in Thailand in December 1975, then a winter trip to Europe with 2 seminarian friends at the end of 1976, realizing that the world is a small place, and so I continue to try to practise what I preach on that level!!  As life would have it, chemistry proved too dangerous and I figured that priesthood was worth a go, so it was back to Clayton in 1977, and regular involvement in parish life at Holy Saviour Parish, North Glen Waverley, newly established in 1974, encouraged by my good friend, Eric Hodgens, as Parish Priest.  I was ordained deacon there in November  1977, including a reading from Paul’s Letter to Timothy, about deacons being married but once, caring for their wives and children,  and being abstemious and well behaved, so the die was cast, as they say!

In August 1978, the year of 3 Popes, I was ordained ‘popeless’, as Pope Paul VI had just died.  My Mass of Thanksgiving was at Gardenvale the following day, and I remember looking at the crowd gathered to celebrate, and the thought crossed my mind, this is a daunting task and unpredictable challenge, as I wondered about the future, and enjoyed the day.  My first appointment was to a holiday spot in a rundown caravan at Hastings, over Christmas, and then to Croydon, as junior curate, where I thought my parish priest was old, at 50 or so (and still going strong now!), the other assistant priest around 70, and me at 26.

It was a friendly menagerie, in a busy and diverse scene, with baptisms, weddings and funerals, school chaplaincies and nursing homes.  I managed to do a Monash DipEd on the side as well.  After 3½ happy years there, (although my forte was Chemistry!),  I was asked to do Canon Law studies in Rome, as the new Code was due out in  late 1983, but I suggested Ottawa had a good pastoral course,  and I could still be involved in parish life, at least at weekends.  Luckily for me, that proposal was accepted, and so it was into ‘exile’ for another 3½ years, making new friends in the Canadian scene, and enjoying parish life, along with the skiing and skating, and brilliant colours of ‘Fall’ (autumn),  in the second coldest capital in the world, when I was still in one piece!  On the side, I managed to do a doctorate concerning consultation or democracy in the Catholic Church!  Hopefully the impending Australian Synod might move in that direction by 2020.

The price to pay on return was to work full-time in the Melbourne Tribunal Office, helping people get on with life in the Church, and another relationship, through the annulment process,  also lecturing at Catholic Theological College in Canon Law,  residing first at East Preston Parish for 3½ years, and then Parkville for another 3 years or so, before moving back for a ‘second life’, to North Glen Waverley, as parish priest in March 1993, now 25 years ago, continuing part-time lecturing and Tribunal ministry.  A ski crash, self-inflicted, in Vail, Colorado in January 1989, prematurely ended my winter sports efforts!
My second ‘exile’ was to go ‘on loan’ to Broken Bay Diocese, for 2 years,  (somehow extended to 18 years),  when asked to be Tribunal Director up there, so it was on 31st January 1998, some 20 years ago, that I moved to Asquith Parish as parish priest, where I spend 5½ very happy years, in a place reminiscent of my early days in Croydon,  again making new friends and being part of a vibrant parish community, inheriting Berowra parish as a bonus, in the last year.  Peak period at Asquith was in September 2000, when I had 25+ friends staying for the Sydney Olympics,  the presbytery conveniently located opposite the railway station!!  The loungeroom became a dormitory, and those in the tent in the backyard had to sleep in the parish office when a Sydney storm interrupted their reverie! For one time in my life, I didn’t mind an early morning rise, in terms of getting a hot shower!

Somehow, holy obedience forced me to accept an episcopal direction to move to Manly in June 2003, and I spend a further 12 years facing the Pacific Ocean surf, in yet another marvellous community of friends, with the bonus of inheriting Harbord (now Freshwater) Parish as well around 2009, such that I overlooked 3 of the best beaches in Australia – Manly, Freshwater and Curl Curl.   A hip replacement gave me a new lease of life in later 2004, so that I was free again to walk as far as I liked, after hobbling my way through the 1990’s.  Between baptisms, funerals and annulments, and being a part-time Vicar General for much of my time in Broken Bay,  it was a fairly demanding schedule,  but relieved with great collaborative support from staff, involved parishioners and volunteers. All good things come to an end, and so my return to Melbourne in mid-2015, led me to Scoresby as parish priest, for 2 years, with 2 primary schools, and a large multicultural community.  It was after 2 years there that I was approached to make another move, this time to Essendon, to fill the gap, and provide continuity of pastoral and sacramental care, after my good friend Bill Attard’s 9 years of active and productive ministry.

And so, here I find myself, once again trying to learn new names and faces, with a vibrant and enthusiastic school community, where I was delighted to learn that my favourite author had prompted a world record for the Guinness Book of Records, with the number of Dr Seuss characters present in one day, back in 2016!  I continue to have an interest in children’s literature and brightly coloured stoles, an absolute disinterest in plain sox, and an enthusiasm for left-field thinking, being a left-hander, even if clumsy! I consider myself so fortunate to have had such co-operative and capable staff over the many years I have been in many different positions, and who have continued to be good friends as well, a real enduring bonus!

Priestly ministry over the last 40 years or so, has provided me with many interesting opportunities and challenges.  I look forward to continuing to work with those in our parish community here at St Therese’s, in trying to live the Gospel of Jesus as good news in our lives, and supporting each other in faith and life.

With warmest wishes to all.